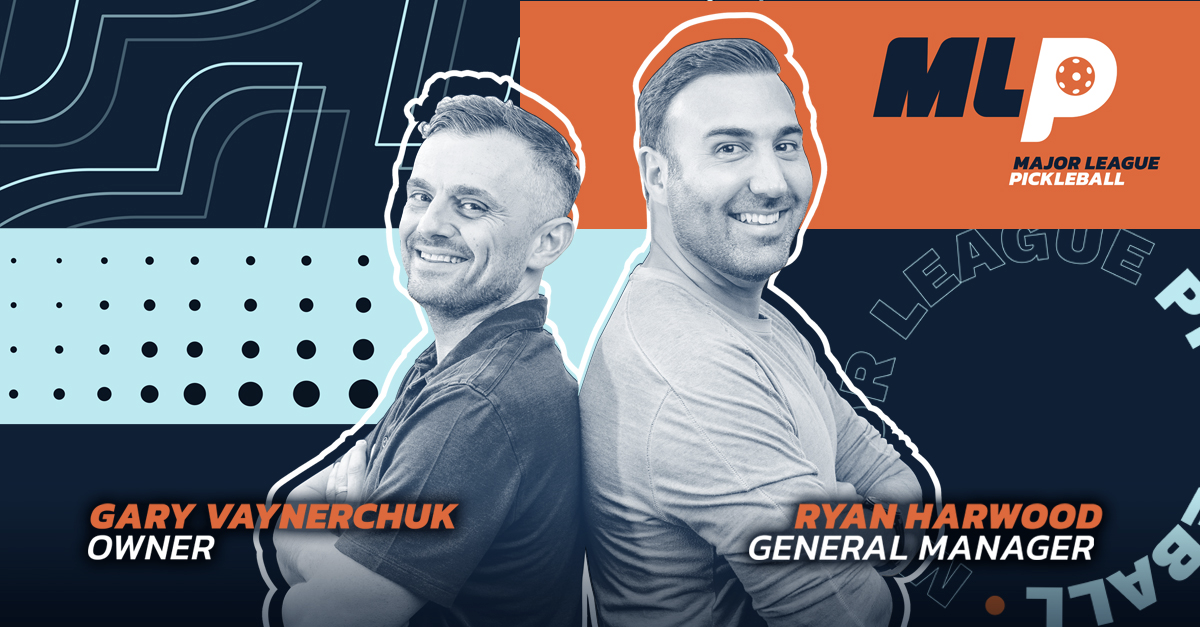 New York (April 5, 2022) – Gary Vaynerchuk, recently announced as a new Major League Pickleball (MLP), Team Owner, has confirmed his MLP team name as The 5s, a homage to Gary’s favorite number. Additionally, Vaynerchuk has confirmed Ryan Harwood as General Manager (GM) of The 5s. Harwood, a former Division 1 Player / Captain for University of Pennsylvania's men's tennis team, is the current CEO of Gallery Media Group and Founder of PureWow and ONE37pm. Harwood will lead The 5s as they take part in MLP’s 2022 Draft and MLP competitions throughout the forthcoming season, the first of which will take place at Dreamland, Dripping Springs, Texas, from June 3 – 5, 2022. Vaynerchuk has also unveiled the official logo of The 5s, featuring Competitive Clown, one of the recently unveiled 15 new VeeFriends Series 2 characters.

“The 5s are going to be the most exciting team in pro pickleball, and I’m proud to have the opportunity to lead our team as we set about our first season in MLP,” commented Ryan Harwood. “As the whole of the USA is finding out, pickleball is the sport for our age, and when you see it at pro level, you know why the men and women who are competing at the top of the sport are the superstar athletes of the future. Our job at The 5s is to give our team the best possible chance of winning MLP events, and to help make them household names. It’s an exciting challenge, one we’re all hyped about getting started on, kicking off with the Draft at the end of May.”

“5 means the world to me in the context of sports as it was the first jersey number I received and wore when I came to the US.,” explained Vaynerchuk. “My mom knitted that jersey for me, and the number 5 has always been my favorite ever since. Now it’s on our MLP team and in our logo, alongside Competitive Clown, and I couldn’t be more proud to have that number, that means so much to me, as our team name.

“Ryan and I have been business partners long enough for me to know The 5s is in the best possible hands with him as GM,” added Vaynerchuk. “We share a belief that pickleball can truly change lives – it’s a sport that engages people of all ages, and the athletes in our team are the hero figures that will inspire generations to come. It’s also worth saying, we’re in this to win.  Ryan and I are fiercely competitive people. I’m excited to see who we can bring into our team in the Draft, and how that group then goes out and performs when we start competition in June.”

The 2022 MLP Draft will be revealed on Saturday, May 28th in a livestream on MLP channels including MajorLeaguePickleball.net, MLP YouTube and Facebook. The Draft will set the teams for MLP’s first 2022 team competition, which will be held at Dreamland, Dripping Springs, Texas, from June 3 - June 5, in which 48 of the world’s best professional pickleball players, 24 women and 24 men, will compete to win the second-ever MLP competition, with the finals set to be exclusively televised on CBS Sports Network. The preceding rounds will also be livestreamed on MLP digital channels.

Major League Pickleball (MLP) is the elite professional pickleball competition that sees teams of two women, two men, compete in a unique format that has set new standards in the fastest growing sport in America. MLP’s first-ever event, which took place in November, 2022, raised the bar for pro pickleball, introducing broadcast and event production innovations that saw MLP awarded the title “Event of the Year” by The Dink. In addition to MLP’s goal to create engaging new platforms to showcase the best professional female and male pickleball players worldwide, MLP is also focused on helping build the grassroots of the sport, attracting both new participants and fans to pickleball in the USA and worldwide. For more information on Major League Pickleball, go to MajorLeaguePickleball.net and follow Major League Pickleball on Facebook, Twitter, Instagram, TikTok, Pinterest and YouTube.