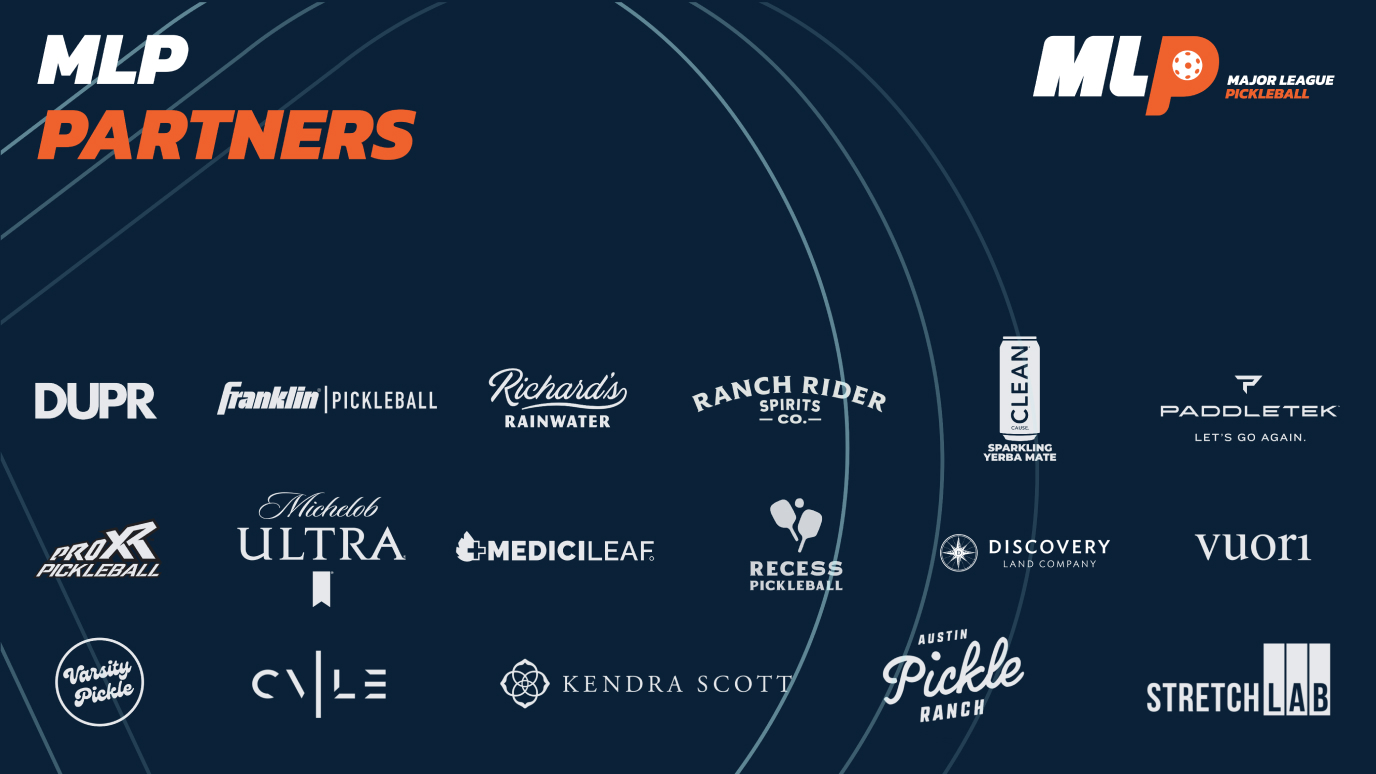 AUSTIN, Texas (Nov. 3, 2021) – Major League Pickleball (MLP), the elite pickleball league that will begin play of its inaugural season on Friday, Nov. 5 at Dreamland - Dripping Springs, Texas, today announced its full list of sponsors for MLP’s Season One. The first-ever MLP competition will run from 8 a.m. CT on Nov. 5, with the action streaming live on MLP’s Facebook and YouTube channels, until the finals at 8 p.m. CT on Monday, Nov. 8, which will be broadcast live on CBS Sports Network.

"We are thrilled to have a long list of wonderful sponsors on board for the inaugural season of MLP,” said Mellie Price, Major League Pickleball President. “There is palpable excitement heading into this week’s first-ever competition, and we’re proud to partner with these companies as play begins and as MLP starts to fulfil our goal, together with our partners, of helping continue to grow the sport of pickleball.”

Among the MLP Season One sponsors are:

DUPR, the most-accurate global pickleball rating system trusted by the PPA Tour, and the world’s premier pickleball clubs, tours, and professionals. Using an innovative rating algorithm on a scale of 2-8 designed for accuracy, transparency and adaptability, the DUPR Rating system factors how close a match was, making every point count. Developed by a renowned Applied Sports Algorithms Expert, the DUPR rating is truly universal — both ageless and genderless — and focuses on the margin of victory (number of points won), not just whether a player won or lost.

MLP Season One, akin to a Ryder Cup-style team event, will see MLP’s eight teams battle for the right to be crowned MLP Season One Champions and lift the Pritchard Cup, named after the founder of pickleball, Joel Pritchard. The unique team format, never-before-seen in professional pickleball, will see teams (each comprised of two women and two men) compete in women’s and men’s and doubles, mixed doubles, and singles as a potential tiebreaker. General admission and VIP spectator tickets are now available for both morning and evening sessions for all four days of the event, the first in MLP history.

Pickleball has been called “the fastest-growing sport in America” by The Economist, with more than four million people playing pickleball in 2021, and a 21% increase in pickleball participants from 2019 to 2020.