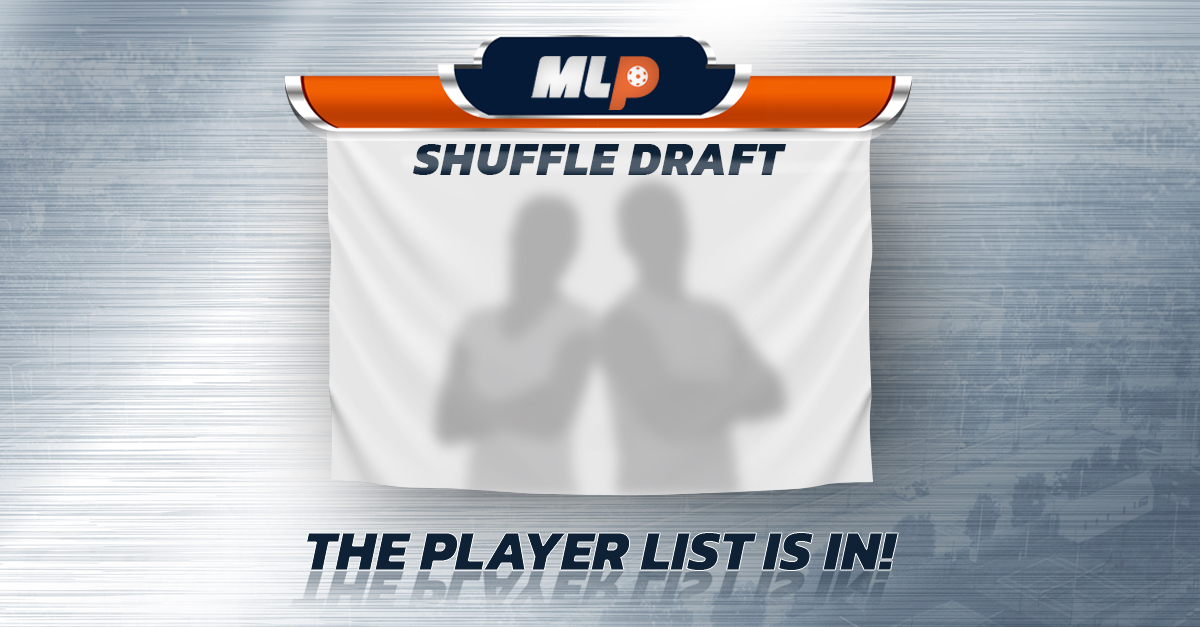 Welcome to The MLP Shuffle Draft Update - your one-stop shop and feed of draft updates as they’re happening in real-time. We’ll be sharing all the details on the eligible pool, player pickups, waiver wires, participating teams, and of course the draft picks right here. So bookmark this page and follow us on our social channels for all the alerts and notifications pertaining to the MLP Shuffle Draft!

Our final draft picks are in for MLP Columbus 2022! Here we go!

Congrats to our players... see you in Columbus on October 14th!

Here's the list of players placed on the waiver wire. These players are now available to be drafted to a new team for Columbus:

The draft picks will officially commence on Monday, August 29th at 9am.
‍

Here's the FULL available player draft pool for MLP 2022 Columbus, ordered by highest DUPR doubles ranking. Ladies first. Athletes already on a team are not included here. The DUPR minimum to qualify for Columbus is 5.20. This list now does include players placed on the waiver wire.

The Bus' ownership group said, "We want to thank Kyle and Milan for their efforts this year and we are excited to welcome our two new players John Cincola and Susannah Barr to The Bus. Our team has been very competitive this season, only missing the playoffs by the smallest of margins at the first two events. We feel like this trade gives us great chance to compete for the title in Columbus!"

The Hard Eights ownership team chimed in and said, "It was a privilege watching John and Susannah compete for the Hard Eights. We appreciate the spirit they brought to every match and success they brought to the team. The Hard Eights will always be willing to take a calculated gamble and with only one tournament to go this season, we felt the time was right to make a move in order to give ourselves the best chance of winning it all in Columbus."

UPDATE 7:00PM 8.20.2022
The first two teams making a move as we head toward Columbus are Mad Drops Pickleball Club - sending Adam Stone and Vivienne David to the Jackrabbits in exchange for Mary Brascia and AJ Koller.

Team Owner David Mercado of the Jackrabbits said “Mary and AJ were such great teammates and we wish them the best. With Vivienne, we think we’ll have one of the best women’s teams in the league, and we’re excited about Adam’s leadership which we think can help us contend for a championship.”

Mad Drops Pickleball Ownership chimed in on their trade decision as well - “Vivienne David and Adam Stone are consummate professionals, all-time team players and among the most joyful, enthusiastic and talented players in pickleball. While we are sad to lose them, we know that they will continue to make big things happen for the Jackrabbits in MLP."

"We are thrilled to welcome AJ and Mary to the MDPC Squad for MLP Columbus. AJ is one of the most talented male players in pickleball and Mary is an incredible defensive player and up-and-comer in the women's game, and we're excited to have both of them on the team."