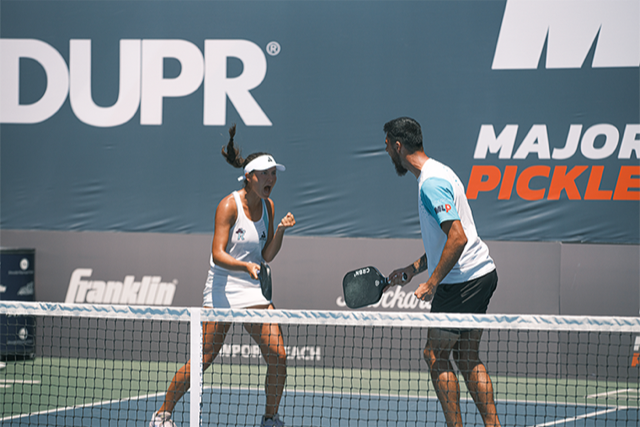 The Ranchers were led by Anna Bright, Jackie Kawamoto, DJ Young and James Ignatowich. Both James Ignatowich and Jackie Kawamoto were added to the team during the MLP Shuffle Draft held in early July.  The team was undefeated 5-0 in Newport Beach and took home $100,000 in prize money ($25,000 per player)—the largest prize pool in all of pickleball.

"Really high stakes, there's nothing else like it,"said Anna Bright, who won women's doubles and mixed doubles in the final. "I've never played for this much money. So stoked to be here.”

At the conclusion of the Finals, Anna Bright and Jackie Kawamoto were named co-MVP’s of MLP 2022 Newport Beach, where the duo went 9-1 and 8-0, respectively, en route to their title, an award presented by JackRabbit eBikes.

“I want to thank our fans, sponsors, and especially our players who bring to life the MLP coed team format. It is so rewarding to have the players talk about how much fun it is to play as a team and the joy it brings them,” said MLP Founder Steve Kuhn.  "We are thrilled we are able to award the highest prize money in pickleball and we look forward to having even more highly entertaining matches at MLP Columbus this October."

For its Newport Beach event, MLP brought in an innovative pickleball stats company, 002Stats, to provide live statistics and insights for the broadcast crew and detailed boxscore breakdowns for team owners. They also delivered immediate game results, along with player and team standings updated on the MLP website so fans could follow the action in real time.

“Working with 002Stats gives MLP the ability to push the sport forward with stats and data for the fans and players to engage,” said MLP Commissioner Brooks Wiley. “Data analytics enable players to analyze their own game with a fresh perspective as well as understand their opponents playing styles in new ways. The ability to record and document results solidifies the foundation for MLP to capture history while creating it.  MLP is demonstrating what's possible as professional pickleball continues to bring in the same technologies as other major professional sports.”