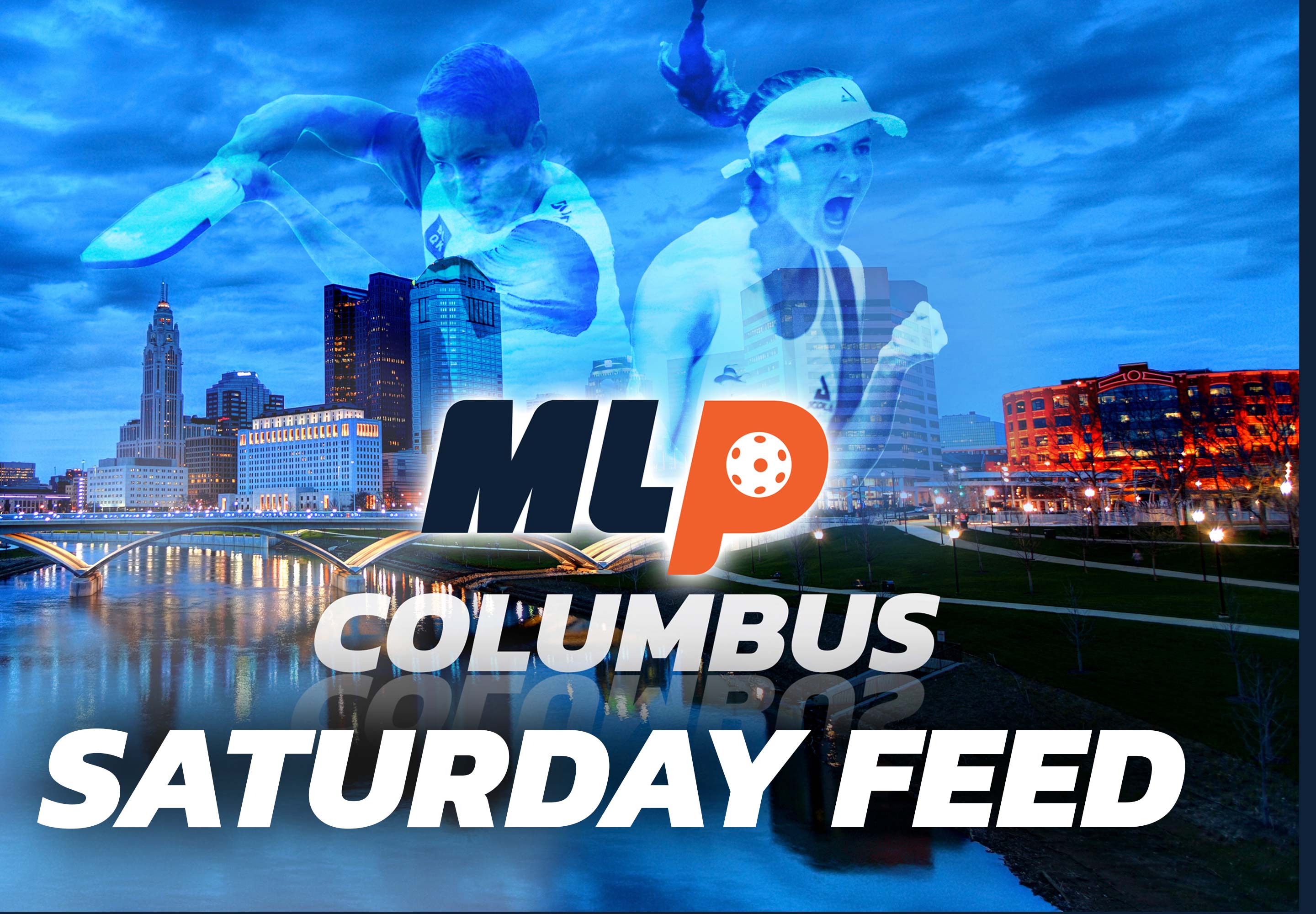 Welcome to the ‘Saturday Feed’ - your go to destination for the most current info on matches and game play happening at MLP Columbus all day Saturday. Be sure to bookmark this page and come back for the latest updates all day.

11:00am MAD DROPS PICKLEBALL CLUB vs. THE RANCHERS
Women's Doubles: Ranchers win 21-14
Men's Doubles: Mad Drops wins 21-19
Mixed 1 (Brascia/Arnold vs. Bright/Young): Ranchers win 22-20
Mixed 2 (Whitwell/Koller vs. Kawamoto/Ignatowich) 21-19
MATCH WINNER: MAD DROPS PICKLEBALL CLUB 3-2
Mad Drops come off the first game loss and get fired up going toe to toe with the Ranchers and pull off a win in an exciting Dreambreaker. The crowd was electric. Andiamo!

11:30am THE BUS vs CHIMERAS
Women's Doubles: The Bus wins 21-13
Men's Doubles: Chimeras win 21-19
Mixed 1 (Koop/De La Rosa vs. Stratman/Lange): Chimeras win 23-21
Mixed 2 (Barr/Burrows vs. Fudge/Tardio)
Dreambreaker: The Bus wins 21-19
MATCH WINNER: THE BUS 3-2
The women of the Bus ran away with the game, earning 8 kills each with an impressive 21-13 victory. The Chimeras men came in and won important clutch points to take it 21-19. In MX 1, there were 13 ties and 5 lead changes. Wesley Burrows controlled MX2 thrashing 12 kills, to take it home for The Bus. In the Dreambreaker, there were 10 ties and 6 lead changes.. Lauren Stratman of The Bus stood out to win 9 out of 12 points in the Dreambreaker to close it out!

What happened in the Quarters

GOING INTO THE SEMI-FINALS

BLQK - looking strong with their 2 female players being in the top three of the total player standings list. They are yet to play a dream breaker unlike their opponents Clean Cause team that already part took in 2 Dreambreakers. BLQK so far in 3 matches cumulatively had 128 kills and 82 errors which gives them a healthy 1.5 k/e ratio. Clean has 181 kills and 182 errors which put that right below the equal ration of kill/error of 0.99

On the other side of the semis are Hard Eights and Ranchers. Similarly Hard Eights played more Dreambreakers than their opponents (a total of 3 of them). In terms of kills the team overall is holding 234 kills and 156 errors in the total of 4 matches they played which gives them solid 1.5 k/e ratio.

Ranchers on the other side played 2 dreambreakers in their 3 matches (skipping having to participate in QFs). Their team total kills sum equals to 157 and errors of 107. This puts them right before their opponents in a pretty healthy k/e ratio of 1.46

Here's the schedule for the semis and the finals Sunday!!